Skip to main content Skip to search
You are here
DR 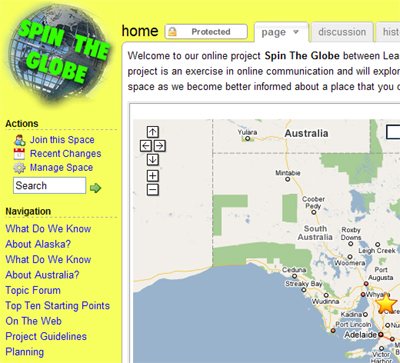 Many of us have have enjoyed reading both of Graham Wegner's and Doug Noon's blogs [ http://gwegner.edublogs.org and http://borderland.northernattitude.org ] for some time now, and several weeks ago we were delighted to learn about their wiki project, Spin the Globe [ http://spintheglobe.wikispaces.com ] .

Woody Woodgate -- who teaches in Marshall, Alaska, and has been doing all sorts of wiki and blog and Voice Thread projects with us here in New York City and elsewhere [ http://youthwiki.wikispaces.com/Marshall+School%2C+AK ] -- was so inspired that he started to spearhead a curriculum into an urban/rural comparison. As you can tell, we have just begun to develop this curriculum: http://youthwiki.wikispaces.com/Rural+and+City+collaboration+-+Alaska+meets+New+York+City

As we plan this work, we are looking at other examples of urban/rural exchanges such as the exchange between Joel Arquillos' students in San Francisco and David Boardman's students in a town in Maine.


When Joel Arquillos, a social studies teacher at the Galileo Academy of Science and Technology in San Francisco, started his 11th-grade American history students blogging, he didn't know what to expect. Mr. Arquillos set up a group blog as a joint project with David Boardman's English class juniors and seniors from rural Winthrop High School in Maine for students to post assignments online, comment on each other's work and expand their cultural awareness. At first, the students needed to be prodded to post. But the blog took off when Mr. Arquillos had them write about their neighborhoods. A student who lives in the Tenderloin district in San Francisco described her feelings about the drug dealing and gang violence in the neighborhood. The Maine students posted that they had thought neighborhoods like the Tenderloin were urban legends. Soon, the students started posting on their own to find out what their peers cross-country thought about various subjects (the structure of the new SAT's, good reasons to skip the prom, etc.), discussions that almost came to match the assigned writings in volume. "I want to give these kids the tools to say, 'Hey, my voice is important in this world,' " Mr. Arquillos said after the yearlong experiment. "This blog helps me do that."

Here's the kind of frank, thoughtful conversation you will hear on this podcast:

Graham calls it a grassroots collaboration. And that, it is. He set up a wiki last August called Spin the Globe. It’s a web space where his class and mine can hopefully learn from each other about our respective far-flung parts of the world. Graham gave it a fair review, but I haven’t had a lot to say about it because it hasn’t really come together for me and my group yet. But we’re getting there, and now, since Paul Allison invited me and Graham to discuss it this evening on the Teachers Teaching Teachers podcast, I’m sorting through my reactions to the project so far.

I’ll be honest here and state the goals that Doug and I negotiated have been our guiding light because the process and the final product has been constantly malleable and subject to redefinition. The big difficulty was making this project important to two very different groups of students living very different lives. My class enjoyed the advantage of being the initiators and being very settled as we were well into the second half of our school year. They knew me, I knew their capabilities and by that stage in the year I knew them all well enough to enthuse them about this mysterious project we were doing with “the kids from Alaska”. Doug, on the other hand, was just starting his new school year and was still working out his group’s particular tendencies and skill sets. From my perspective, his position was always going to be trickier to manage. But I have to pay tribute to his support, his diplomomatic balancing of some of my hare-brained ideas and ultimately suggesting ways to get around some of the barriers (cultural and technological). One of the best pieces of advice actually came from his wife, also a teacher, who pointed out that a top-down approach that dictated specific roles and topics for students was somewhat at odds with the inquiry based approach we were actually wanting for them. In my class, the project gained its largest boost of momentum when I spoke to my students and announced that the shackles were off and they were free to develop whatever pages of the wiki they wanted. After all, Wikipedia contributors don’t get assigned to write specific articles by a superior. I know that a classroom effort can’t be quite as organic as that but productivity and engagement went up noticeably from that point on.

There are currently 0 users online.