Skip to main content Skip to search
You are here
DR

A provocative conversation about Teachers Speaking Up w/ @AndreaZellner, @KSchulten, @StevenZemelman, @Ochoajen @MsSandersTHS, and Pat Delaney on this episode of TTT (Please subscribe with this link: http://www.teachersteachingteachers.org/feed/podcast/ (And BTW http://cloud.feedly.com is a great replacement for Google Reader. The App, BeyondPod now integrates with Feedly.)

On this episode of TTT, we are joined by:

This episode is a follow up to TTT#351 Teachers Speaking Up w/ Jesse Hagopian, Diana Laufenberg, José Vilson, Steven Zemelman, Pat Delaney, Maribeth Whitehouse http://edtechtalk.com/node/5198 -- and we plan more on this topic later this summer.

Here are a few notes from the show:

Look at what happened in Michigan today, Andrea Zellner writes: Our teachers are passionate and outspoken: http://www.michiganradio.org/post/teachers-rally-lansing-more-support-pu...

Jen Ochoa's "Give Them an Apple, or a Hug: Help Teachers and Students Survive Testing" http://www.wnyc.org/blogs/schoolbook/2013/apr/16/give-them-an-apple-or-a...

Be sure to follow up at Teachers Speak Up http://teachersspeakup.com , a blog, where Steve Zemelman is a co-convener.

Some of the interesting things going on in Philly for Teacher Voice -
http://facesofthelayoffs.org/about-the-project/
http://thenotebook.org/
http://www.educationvoterspa.org/index.php/site/take-action/
http://www.philly.com/philly/blogs/school_files/ (Kristin's live-tweeting of the SRC meetings is legendary and an amazing resource for the community)
http://www.tagphilly.org/

Lisa Neilsen's group on Facebook:
https://www.facebook.com/groups/homeschoolingunschooling/
A place where parents, students, teens, and teachers frustrated with traditional schooling can come together to discuss the more effective options they are pursuing. Conversations often address things like opting out of testing and other traditional schooling issues.

Click Read more to see the chat that was happening during this live webcast.

Our goal in this--and the next--episode of TTT teachersteachingteachers.org/feed/podcast is to join those who are developing a practical, pedagogical discourse between the heckling and the hype around badges. Our conversations are open and wide-ranging, but we have a few questions that must be answered soon, as the fall semester starts up around the US:

Of course, it's impossible to pull apart the different philosophical, political, and psychological threads that seem to attach themselves to badges, but the educators in this conversation begin to bring some clarity to the questions involved.

There's only so much that this many thoughtful participants can say in an hour, but we hope that there are a few moments while you are listening when you find yourself wanting to enter the conversation. Let us know what you are thinking by posting a comment below. And join us next week as we continue our conversations about badges on TTT with these thoughtful educators:

We’ll continue to focus on incorporating badges into K-12 education and beyond. There’s so much to say on the topic.

What’s your favorite blog post, video, article, resource about Badges? Please add a couple of links in the comments below. We want to be open and flexile about all of the ways people are talking about the issues involved. And, we are interested in keeping it real. We’ve been developing some ideas around badges for Youth Voices youthvoices.net, and there's more about this on P2PU goo.gl/oKQ1R.

See you on Wednesday.

THANK YOU for all of the support and good wishes upon TTT#300.

Here's Paul Oh's description of our work: Teachers Teaching Teachers Achieves 300th Broadcast Milestone
http://www.nwp.org/cs/public/print/resource/3838
Kevin Hodgson's thoughtful report: http://digitalis.nwp.org/site-blog/ttt-300-and-going-strong/3849
Chris Sloan's kind words: http://digitalis.nwp.org/site-blog/ttt-turns-300/3851
Gail Desler's insights: http://digitalis.nwp.org/site-blog/teachers-teaching-teachers-connected-lea/3848
One-minute teaser (entire video below):
We started our celebration with a look at a couple of the philosophical touchstones for TTT, mainly World Bridges and the National Writing Project. Jeff Lebow (WB) and Elyse Eidman-Aadahl (NWP) helped us with these starting points.
Here is Paul skyping in to EdTechTalk#40 (pre-Webcast Academy Launch) asking "Why do it live?   http://edtechtalk.com/files/ETT40-why-live.mp3
Here's more about World Bridges from Curt Bonk in 2007 http://travelinedman.blogspot.com/2007_07_01_archive.html:
More on Worldbridges:
The goals of Worldbridges are relatively simple and straightforward, as follows, “Our primary goal is to foster understanding and cooperation amongst the citizens of the world. We value civility and respect, open source collaboration, fair distribution of income, and a sense of world identity.” As part of these efforts, Worldbridges seeks to foster positive systemic changes in areas such as education, the environment, and politics. It also supports reliable and fair commerce. And it promotes a “people’s forum” for more civilized discussion of problems, issues, and conflicts that pose significant challenges in united the people of this planet. Values supported by the Worldbridges organization include respect and civility, fair distribution of income, world identity, and open source collaboration.
Jeff Lebow began experimenting with Worldbridges ideas (initially called “World Explorer”) when starting his master’s program in Training and Learning Technologies at the University of New Mexico in 1993 after a year of teaching English in Thailand (Worldbridges, 2007). At that time, Lebow became excited at the possibilities of the convergence of intercultural interaction and collaborative and interactive online technologies. After completing his masters, he returned to Asia—this time Pusan, Korea—where he taught English as a university and began to experiment with online audio and video, which included covering the Nagano Olympics in 1998. After burning out on all his activities and attempting to envision and build a webcasting network his life took a turn, or as he puts it, “I decided to quit my job, shave my head, and go to India for a while to contemplate the next chapter, for me personally and for Worldbridges. After some quality offline time, I decided to give Worldbridges a shot.” In Lebow’s vision for Worldbridges, he sought for it to become a means for using Internet technology for a global webcasting network of people. And it has!
_________________________________
And here's a paragraph about the National Writing Project's core philosophy by Art Peterson in 2004
http://www.nwp.org/cs/public/print/resource/1357:
The National Writing Project's core philosophy, "teachers teaching teachers," is perhaps most directly expressed in the invitational summer institute's teacher demonstrations. NWP founder Jim Gray writes in Teachers at the Center, his memoir of the writing project beginnings, "The most successful demonstrations communicate not only what the teacher does but also why the teacher thinks this particular practice works. The emphasis upon the why as well as the what is important: it provides a theoretical underpinning and it accents a considered approach to writing beyond mere gimmickry" (143). According to Gray, this demonstration serves as a "trial run" for the workshops future teacher-consultants will present during inservice work in the schools, but it is intended to be much more than a simple demonstration of a strategy or technique. It is intended to be a significant "genre" for the circulation of knowledge about practice.
__________________________________
Enjoy!
Click Read more to see a copy of the chat that was happening during the webcast.
Taxonomy upgrade extras: 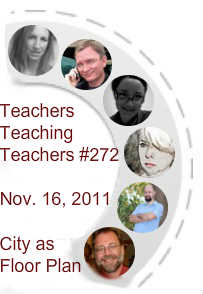 In a busy week with conferences and conventions--physical and and online--going on all over, it was good to stop and think about what we want schools to look like. On this episode of Teachers Teaching Teachers, Paul Allison introduces his Assistant Principal, colleague and friend Ron Link to Monika Hardy and Mary Ann Reilly. Ron is cooking up ideas for a new school, and many of his thoughts have seemed parallel to some of what Monika and Mary Ann have been talking about at labconnections.blogspot.com. Andrea Zellner and David Wees are always a delight to hear from! Enjoy this conversation, and let's keep talking about what we want schools to look like. Joining this episode are: monika hardy,  Ron Link,  Andrea Zellner,  Mary Ann Reilly,  David Wees, and Paul Allison

Click Read more to see a copy of the chat that was happening during the webcast.
Taxonomy upgrade extras:

There are currently 0 users online.